Or rather went? I mean, the day trip itself was back in July but I just got around to uploading the photos on my computer so… Whatever! Point is, this is a little excursion my younger cousin and I took together.

There we were, relaxing in Paros (fancy, huh?), lazing away the days until I figured; What the heck? Let’s do something a tad different for once. Hence my dragging C. out of bed at the ungodly hour of nine in the morning, with the intention of visiting the beach of Marchello (oh the joys of transliteration!).

So, after plenty of yawns, a quick breakfast and even faster double-back (because certain people forgot stuff…) we made it to Paroikia. For the uninitiated, this is the island’s largest village and where the boats from Athens (or pretty much any starting point) leave you. From there we took the boat (as in kaiki, not a proper ship) and made the short trip to Marchello. 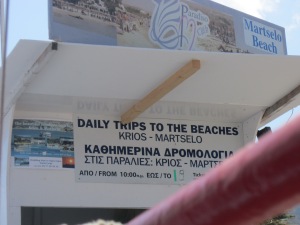 There’s this little kiosk where you can buy tickets and find out departure times right next to where the boat is tied.

That’s the inside of the boat! I swear one of these days I’ll brave my seasickness enough to climb on the top deck!

And here’s Yours Trully! Picture kindly taken by Cousin who, although nine years younger, has a far better eye than I do for this sort of thing!

We stopped and bought some magazines to read on the beach!

Back to Yours Truly:

So, as you can see from the pictures, we get our own tiny tropical paradise complete with white sand and sapphire-blue waters! And all for less than 20 € too. The adult return ticket for the boat is 5 €, for the kids 3 €. Moreover, part of the beach in not what is commonly known here as “organised”, meaning you don’t necessarily need to pay for a sunbed/umbrella combo. And even if you want to treat yourself, it costs 7 € for the umbrella/two sunbeds, or 3€ for the single sunbed (for all you lonely souls).

The water was a tad cold, not all that surprising. For the past few days the temperature has been dropping and anyway, I never claimed to like the “cool” part of the spectrum… There was splashing around and swimming and laughing at those who had never been here before and did not know that a ship leaving the port on the opposite side is both impressive to watch and the cause for waves.

C. The water in the beginning was cold but then it got warmer.

To which I say: WHATEVER, I still got all tingly! –ahem- Yeah, at some point we decided we had enough of “swimming” and moved back to the glory that is the combination of dry towels, sunlight and sunbeds.

The taverna/changing rooms/sunbed rental place at the back of the beach.

Pretty water is pretty. That’s Paroikia at the back.

I swear this picture was not staged. C. had my camera at hand and I was about to get back in the sunny bit of the sunbed and well…picture happened…

I would like to say at this point that normally I find fashion magazine B.O.R.I.N.G. but with the sun making me drowsy that’s just about what I can mentally handle. Cue the sunbathing time (I do love the heat) and obligatory laughs at some of the more outrageous designs.

C. The fashion magazines are not boring. Especially when they have summer clothes and swimsuits.

-sigh- Three guesses on who is entering their teenage years and who is happily out of them. We only left from the beach because our stomachs were growling and a nearby tavern was making us even hungrier with the smell of roasting meat.

A quick shift of clothes….

Have I mentioned how much I ADORE this dress?

…and it was back to the boat and Paroikia for us,

This picture took way too many failed tries to take….

C. Marchello beach was awesome. We had a very good time while we were swimming, talking, reading summer magazines and of course laughing. ^_^

You heard it! “From the mouths of babes”… There’s plenty of eating choices in Paroikia, but one of the side effects of coming to the same place summer after summer is that you will have your favourites (and will always go there). C. wanted souvlaki (not that I complained). Our favourite is Pepe’s with its great food and gorgeous prices.

Why yes, I do have a thing for taking pictures of signs.

And by gorgeous, I mean cheap. And by cheap, I mean broke student friendly. 😀

C. The souvlaki was really tasty and the chips were even better.

We had a quick lunch there and went for a stroll, which –because this is Paros- meant that we ended up at a coffee shop, specifically Distrato (again, joys of transliteration). It’s one of those multi-purpose places where you can have breakfast, lunch, in-between coffee, sit down for a crepe or an ice-cream, or even have a beer. Nobody can say anything about the adaptability of a “café-restaurant”. I would whole-heartedly recommend the  sweet crepes there, as well as the coffees.

C. I had a banana milkshake! 🙂

Anyway… After a blessed (and much needed) coffee break there was more aimless roaming, and drooling over jewellery store windows. I just looooooove gemstones! It’s sorta funny walking in Paroikia this early. Nearly all the shops are closed for lunch break or siesta break (call it what you will). So you actually get to see the buildings instead of being dazzled by the waves of people around you.

Unfortunately at this point C. started realising that she was tired so we caught the bus back to Naoussa (a village closer to our own place) and waited there for mum to pick us up. (Love you mum!) 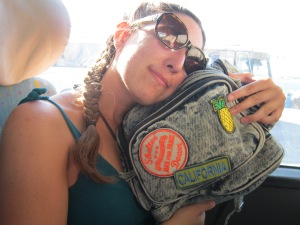