Or at least it would seem so, wouldn’t it? Just look at this beautiful, colourful, paper-y chaos! 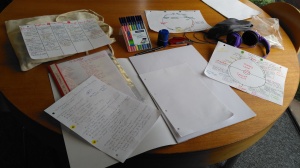 A looooooot of tools!

Heh, I remember, back in high school, one of my teachers telling me off for -apparently- paying more attention in making my notes pretty and colourful than the lesson. She was kind of right, honestly. I only took Economics because I needed the credit, bu she was also wrong. I like colour-coding things. It makes them easier to remember. In elementary school (when books still have pretty pictures to go with the texts) I could remember better text surrounded by colour. That and the highlighter bug I think I caught from my mother. She was the one to teach me the difference between turning the page a different colour and actually highlighting the most important point.

So here I am, more than a decade later, almost compulsively taking multi-coloured and badly illustrated notes on all important modules. The beautiful chaos on these pictures is me trying to cobble together my thoughts and ideas for my thesis into something that makes sense to someone that does not have a psychic link with me. My supervisor advised me to make the outline in the form of a map in order to see how the different points I’m trying to make connect to one another. The end result is something like this:

A map alright. A map of the multiverse if you will.

I’m going to attempt and turn this to the standard bullet-point format but I am not sure I’ll manage. The thing is, as confusing (and frustrating at times) it was to make my little diagram (little, ha! That’s an A3 paper, baby!), when I look at it, it makes sense. Starting from the centre and moving outwards and clockwise, coming back to certain points again and again, I suppose it’s as close to an illustration of my thought process as I can get while remaining confined in two dimensions. Yeah, remember those awesome hologram things Tony Stark has in the MCU (that I will not even try to pretend I understand the “science” of)? Boy, would they have can in handy when I was working on this. Or the dangle-y paper thingies Megamind used. Really, the third (and fourth) dimensions are not used nearly enough. Also, once more, all together: What is it with me and crazy/evil geniuses?

Who knows? Maybe one day I’ll figure it out. Until then let us all be thankful I stuck with literature instead of the sciences. In the immortal words of the Big Bang Theory:

A while back I wrote a post in defence of fanfiction. You might want to consider this one the whacky sequel. You see, shipping and fanfiction go hand-in-hand. And yet we don’t really pause to consider what compels us to assume that two characters would be a match made in Heaven? Is it that we see ourselves as one of the characters and want to give them the happy (aka perfect) relationship we might lack in real life. Is it that we believe that such a relationship would be beneficial to their character development? Is it plain and simple fanservice? Something else? All of the above? For me it would be all of the above. I have shipped characters because the relationship I saw developing between them was one I would like to experience in real life. I have shipped characters because I considered a romantic relationship between them an inevitable conclusion (coughAvatarcough). And yes, I have used the justification “But they look ADORABLE together!”. Fan wars aside, one of the cardinal rules of shipping is that if you can think about it, then someone out there is probably shipping it. (Of course that implies the existence of some rather disturbing pairings, but when you’ve hung out Fanfiction.net for as long as I have you learn to ignore them. Besides, I’m told Tumblr is scarier.)

Immature as it might be, I love shipping. I enjoy mapping out character interactions in general (which is why I cannot abide movies/series/books with more gunfire than dialog) but there is something about romance and the Molotov cocktail of contradicting emotions it causes that opens up so many possibilities. You know that scene in Moulin Rouge where they describe the premise behind El Tango de Roxanne? Yup, that at least partially sums things up for me. Even when considered through the cold lenses of science love is the product of a chemical instability. Well, to me, instability = chaos and chaos = interesting plot points. Why are romantic subplots casually inserted? Because it is an easy way to provide conflict and thus get the story going with new momentum if you hit a lull.

But I’m moving away from my topic: why ship? It’s easy if the pairing you support is considered cannon. Your actions then can be seen as building up to pre-established events. Heck! Implied pairings (you know the drill: long, longing looks, more shared screen time than what might be the norm, use of tropes usually reserved for romantic interactions…) get more respect than fan-made pairings. Fannon is what receives the heaviest fire. After all, if Word of God says two people are meant to be together, then who are you, the lowly fan, to say otherwise. Um…a fan? Besides, how often did you see a canon pairing and went “THE HECK?” I remember the first time I watched Big Bang Theory. It was a Season Two episode, I think, and I basically walked in on a scene between Penny and Sheldon. Something about their interaction immediately filed them under established pairing/will-they-won’t-they-situation. Imagine my disbelief when my brother, who had been watching the show for a while, informed me that Penny ends up with Leonard. I’ve watched the show on and off and I’m sorry, I don’t care what Word of God says, I stick by my initial assessment.

Romance has a different meaning for everyone. We carry over our experiences, our dreams, our expectations, and we project them on the characters. In a way (if you are not scared of giving your psyche an honest look) shipping helps clearing up what we do and don’t want out of a relationship. Granted, it’s also fun to speculate, especially in much-loved shows, but when it comes down to it even the most mindless of activities can teach us something if we actually bother to think it through.